When Riverside Medical was in the toddler stages of existence, the concept of making the patient being the star attraction, the idea of "Theme" rooms was born. At Riverside Medical, gone are the days of being just a "number", here you're a person with a name! As Team members, we were all given the opportunity to choose our own theme with an explanation as to what that theme means to us. I chose the "Hockey" room, and more specifically………the "OILER" room. (Much to the dismay of a few other team members. Jessie, Kathy, Ray Heeheee)

My original vision for the hockey room was that hockey is my sport, and of course the rivalry between teams. I find with a common topic, it would get people talking, and being more open and comfortable within the walls of the exam room. But, now that Riverside Medical has been open for over a year, some of my original vision has changed. The picture we chose to hang in the room has a deeper meaning for me, as I am about to share.

So, if you've had the chance to see the Hockey room, you'll know that the picture on the wall is , Connor McDavid, and Wayne Gretzky. Both great "Team" players, but decades apart. That brings me to my thoughts as of late regarding this room. "Out with the Old, in with the New, that is what Riverside and the Patient Medical Home is to me. We are embarking on the path of modern medicine, and forward thinking. We no longer have the "Doctor-Patient relationship, we have the "Patient-Team" relationship, just the same as a hockey team would be, between players and coaches, less one on one, and more involvement by all. Yes, our providers and practitioners are here to ultimately take care of the patients, but they are also trying to show the patients how they can be a part of their own healthcare too. I hope this gives each person who reads this some food for thought. Taking care of ourselves should be #1, the only number you will ever be at Riverside Medical. 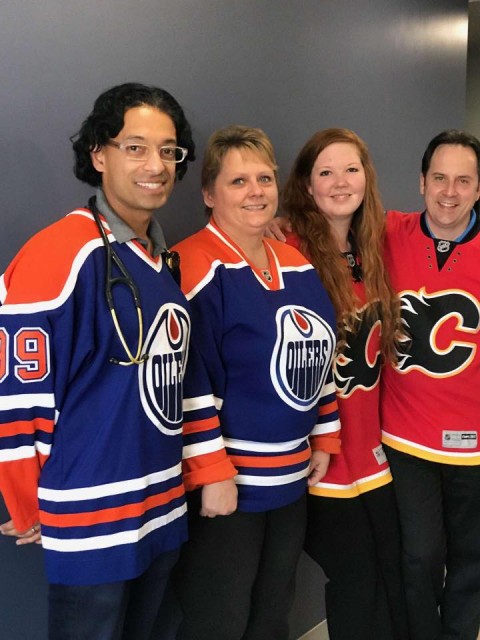 Kindness Everyday Keeps the Doctor Away

Here’s to the Fools Who Dream